DNA methylation (5-mC) and methylation variants like 5-hmC contribute to mechanisms responsible for regulating gene expression and many other biological processes. These epigenetic modifications have also become important biomarkers for cancer, aging, neurological disorders, and many other human diseases.

Active Motif is proud to be the leading provider of products and services to study DNA methylation. Our comprehensive product line can support you whether you need just antibodies or recombinant proteins to do assays yourself or end-to-end epigenetic services in which our experts perform the assays, NGS, and bioinformatics for you.

Enrichment-based methods allow the investigation of DNA methylation and hydroxymethylation at genome-wide or gene-specific levels.

Global ELISA-based DNA methylation assays are used to investigate the overall levels of 5-mC and 5-hmC in samples. 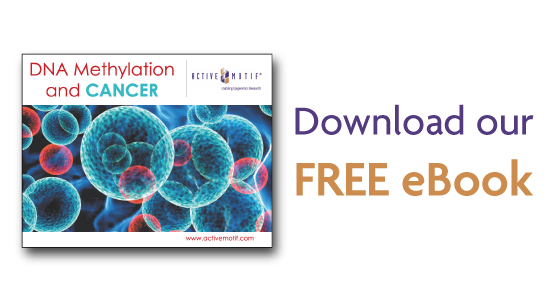 What is DNA Methylation?

Methylation of mammalian DNA has long been recognized to play a major role in different cellular functions as development or control of gene expression and is generally associated with transcriptional repression. The DNA methyltransferases (DNMTs) catalyze the transfer of a methyl group from S-adenosyl methionine to the 5'-position of cytosines, mostly within the CpG dinucleotide motifs1. DNA methylation is involved in a lot of cellular functions such as embryonic development, genetic imprinting, X chromosome inactivation and control of gene expression. Aberrant methylation patterns are associated with certain human tumors and developmental abnormalities.

CpG islands are small regions of the DNA in which the CpG dinucleotide frequency is higher than would normally be expected. While CpG islands are only found in approximately 1% of the genome, they coincide with more than 60% of human promoters. CpG islands are normally not methylated, however, if a CpG island within a promoter becomes methylated the gene associated with the promoter is permanently silenced, and this silencing can be transmitted through mitosis. This means that CpG island methylation is an epigenetic means of inheritance.

Three families of DNMTs have been identified: DNMT1, DNMT2 and DNMT3. The DNMT3 family contains two active methyltransferases, DNMT3A, DNMT3B and one DNMT3-Like (DNMT3L) protein. DNMT3A and DNMT3B establish the initial CpG methylation pattern de novo and show the same propensity for methylating unmethylated duplex DNA as for hemi-methylated DNA. DNMT3L shows significant sequence homology to the cysteine-rich N-terminal domains of DNMT3A and DNMT3B but has only weak homology to the C-terminal methyltransferase catalytic domain. This enzyme has no DNA methyltransferase activity. However, DNMT3L influences DNA methylation pattern by acting as a co-factor of DNMT3A2. DNMT1 is considered as maintenance DNMT, which ensures the maintenance of methylation marks during DNA replication. Indeed, this enzyme shows a specificity for hemi-methylated DNA and is responsible of the establishment and regulation of tissue-specific patterns of DNA methylation in regulatory sequences3. DNMT2 lacks the large N-terminal regulator domain common to other eukaryotic methyltransferases, but it possesses a catalytic domain. It is involved in the methylation of aspartic acid transfer RNA at position 38, giving the enzyme the alternative name of TRDMT1. Although referred to as a DNA methyltransferase, DNMT2 does not methylate DNA, but instead is the first RNA cytosine methyltransferase to be identified4.

The complex series of events leading to a repressive chromatin state involve the coordinated regulation of DNA methyltransferases, other proteins called Methyl-CpG binding proteins (MBD proteins) and the Kaiso family proteins. The MBD family proteins include MeCP2, MBD1, MBD2, MBD3 and MBD45. Whereas MeCP2, MBD1 and MBD2 have been found to have strong methyl-binding activity and transcriptional repression domains6, MBD3 harbors a critical mutation in the MBD domain and does not bind to methylated DNA. MBD3 regulates transcription by forming a Mi-2/NuRD complex with nucleosome remodeling and histone deacetylase (HDAC) activities in mammalian cells7. MBD4 is a thymine glycosylase that recognizes the product of deamination at methyl-CpG sites, as a part of DNA repair system. MBD4 is able to bind the hemimethylated DNA or methyl-CpG TpG mismatches8.

In mammalian cells, DNA methylation is generally associated with gene silencing, either directly by inhibiting binding of transcription factors to their recognition sequences9, or indirectly by preventing transcription factors from accessing their target sites through attachment of MBD proteins that “read” DNA methylation patterns. These MBDs can recruit histone deacetylases and histone methyltransferases, thereby resulting in formation of a closed repressive chromatin structure.

DNA methylation and chromatin modifications interact intimately to bring about transcriptional silencing. The association of DNMTs with HDACs leads to histone deacetylation and, in some instances at least, to CpG methylation. For example, DNMT1 binds HDAC2 and a co-repressor DMAP1 to form a complex at replication foci during late S-phase10. It was reported that the DNMT-HDAC interaction is mediated by the non-catalytic N-terminal part of DNMTs. DNMT3L can therefore recruit HDAC repressive machinery despite its lack of DNMT activity11. DNMTs appear to associate with histone methyltransferase activities that modify lysine 9 of H3. Interaction with the histone methyltransferase, such as Suv39h may be involved12-13. Interactions between DNMTs and proteins HP1α and HP1β have also been demonstrated. It was also reported that Suv39h mediated H3K9 trimethylation (H3K9me3) can direct DNMT3B to major satellite repeats present in pericentric heterochromatin13. DNMTs bound to an adaptor molecule, such as HP1 would add methyl groups to DNA only on chromatin that is methylated at lysine 9 of histone H3. Association of the DNMTs with an H3K9 methyltransferase (e.g., Suv39h) would have a direct impact of H3K9 methylation states on the DNMTs. These would also make contacts with HDACs. This would lead to partial gene silencing. MBD will also be recruited to methylated DNA. The bound MBDs would in turn interact with H3K9 methyltransferase(s) and facilitate lysine methylation. As deacetylation of acetylated histone H3 at lysine 9 (H3K9ac) is necessary for methylation to take place on this residue14. So deacetylation of histone H3 at lysine 9 would be followed by histone methylation, which in turn might result in the recruitment of proteins such as HP115.

Due to the association of DNA methylation in development and disease, much research depends on the ability to accurately quantify DNA methylation. Active Motif offers products for several techniques that can be employed for DNA methylation analysis. To see a list of available DNA Methylation products, click Available Products.

How does DNA Demethylation occur?

DNA demethylation can be achieved passively by the failure of the maintenance methylation during DNA synthesis. But the paternal pronucleus loses essentially all paternal methylation by the first cleavage division, suggesting an active demethylation process. However, the mechanism of this demethylation and the enzymes responsible are still elusive. An initial report that MBD2b might exhibit demethylating activity has not been verified by other groups. Although active demethylation might be the result of enzymatic activity that removes the methyl group from the cytosine base, this might not be energetically feasible and other mechanisms for active demethylation have been suggested. Mammalian glycosylases seem to be unable to perform demethylation efficiently, like in plants. Alternatively, deaminases could convert 5-mC to thymidine. The resulting G:T mismatch would attract a glycosylase to remove the T, which would be replaced by a C by base excision repair enzymes. Candidate glycosylases include MBD4 and TDG. It has recently been proposed that DNMT3A and DNMT3B can function as deaminases, allowing them to catalyze rapid cyclical methylation and demethylation at the promoters of actively transcribed genes1,16.