Epigenetic drug discovery and development programs have attracted much attention and investment in recent years. This is driven by the potential to develop novel therapeutic strategies that can effectively reverse transcriptional and epigenetic abnormalities that are present in many human disorders.

Epigenetic targets are some of the most promising classes of druggable targets to emerge in a decade. These targets are relevant to oncology research, and they also have potential impact on metabolic, neurological, inflammatory, and cardiovascular disorders. 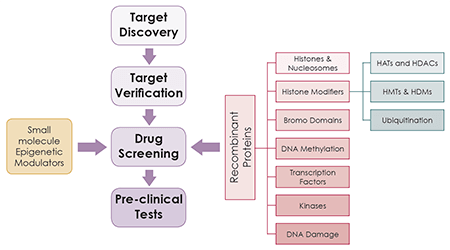 One of the current challenges in the field of epigenetics research and drug discovery is development of robust enzymatic assays that are suitable for high-throughput screens. The key to achieving efficient and reliable screening assays is the ability to routinely and consistently obtain high-quality proteins, both enzymes and substrates.

Furthermore, it’s important that the right format of proteins be used in the screening assays. For example, screens designed to identify small molecules that inhibit the activity of an epigenetic enzyme may only require the catalytic domain, whereas a screen designed to interfere with protein-protein interactions present in higher order protein complexes would likely require using full-length recombinant proteins for best results.

We highlight the most commonly-studied classes of proteins and enzymes in epigenetic drug discovery in this article.

Histone acetyltransferases (HATs) and histone deacetylases (HDACs) play important roles in regulating gene expression and other biological processes by either adding or removing acetylation from histones. Acetylation of amino acids in histones generally makes chromatin more accessible to DNA-binding proteins such as transcription factors and is therefore usually associated with active transcription. Changes in acetylation patterns are observed between normal cells and cancer cells.

In recent years, histone acetyltransferases and deacetylases have emerged as important drug target candidates. CBP and p300 are two of the most commonly studied HATs in humans due to their involvement in many types of cancer and other human disorders when the genes encoding these enzymes are mutated. HDAC1, HDAC2, and HDAC3 are some of the most commonly studied HDACs.

Several HDAC inhibitors are already being used in the clinic, such as valproic acid (VPA) to treat epilepsy and other seizures, bipolar disorder, and migraines. Suberanilohydroxamic acid (also known as SAHA or Vorinostat) is also used to treat cutaneous T cell lymphoma (CTCL).

Check out Active Motif’s selection of recombinant HATs and HDACs.

Another layer of complexity and regulation is conferred by lysine residues in histones being able to be methylated to different extents, containing either 0, 1, 2, or 3 methyl groups (referred to as me0, me1, me2, or me3, respectively). These levels of methylation can specifically impact the functional results of the epigenetic modifications.

Aberrant regulation of HMTs and HDMs have been observed in cancers and other human disorders, suggesting that these epigenetic enzymes are good drug targets.

On the histone demethylase side, LSD1 is one of the main targets for epigenetic drug development. Mutations leading to overexpression of LSD1 are present in many different cancers, and small molecules to inhibit this enzyme are being developed by Roche, GSK, Celgene and others.

Check out Active Motif’s selection of recombinant HMTs and HDMs.

Bromodomains are relatively small (~100 amino acids) protein domains that recognize and bind acetylated lysines, including those commonly found on histones. Bromodomain proteins play an integral role in the regulation of transcription and chromatin remodeling. Because bromodomain proteins have been shown to also regulate transcription of certain oncogenes, they are promising therapeutic targets for cancer treatment.

Changes in DNA methylation states have been observed in many different human cancers. As a result, DNA methyltransferase enzymes (DNMTs) have emerged as attractive therapeutic targets. Several therapeutic agents that inhibit DNMT activity have already been identified, such as azacytidine, and there are many active programs searching for new inhibitory molecules. Other proteins involved in the regulation of DNA methylation include the TET family of proteins which have emerged as potential druggable targets.

The selection of the substrate used in an enzymatic assay is perhaps as important as the enzyme itself. The real biological targets of epigenetic enzymes within the cell are not free histones or short peptides. In biology, histones are organized into nucleosomes containing DNA, and are further packaged into high order structures containing other proteins and RNAs within chromatin.

The complexity and structural variability of chromatin represents a unique drug discovery challenge for these classes of enzymes because it is difficult to reproduce the natural chromatin structure in vitro. Therefore, alternative substrates, such as short modified peptides that can effectively mimic the histone tail, are often used in high-throughput screens.

However, peptides do not accurately reproduce the complexity of the native biological substrate and do not always even interact with epigenetic enzymes in a way that yields a productive reaction.

Other types of substrates have been shown to perform better with specific enzymes and include modified or unmodified full-length histones, histone octamers, mononucleosomes and oligonucleosomes (Figure 2). Therefore, critical decisions need to be made during assay development with regards to what substrate choice will perform best with its associated enzyme in the assay. 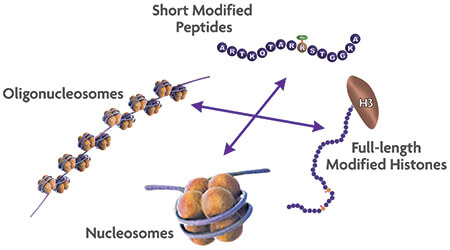 Figure 2. Which histone substrate is the best choice for your epigenetic assays? While peptides are easier to use for certain assays and are generally less expensive to generate or purchase, they may not adequately reflect relevant biology. Therefore, histones in the context of chromatin are most appropriate for many types of screens for inhibitors of epigenetic enzymes.

There are also multiplexable epigenetic assays, using the Luminex platform for example, that enable studying multiple histone post-translational modifications (PTMs) in each sample.

Epigenetic enzymes have been important drug discovery and development targets for over a decade, but recent developments in epigenetic analysis technologies and methods, combined with increased investments from the major pharmaceutical companies are accelerating the use of this class of therapeutic drugs in the clinic.

Many human cancers and other serious disorders are caused by underlying epigenetic mechanisms, so continuous development of new therapeutics fueled by increased access to more and better tools to study epigenetic mechanisms has the potential to be one of the major medical advances of this generation.

Are you doing drug discovery and development with epigenetic targets? Click HERE to request a bulk or custom order of our epigenetic enzymes or substrates.