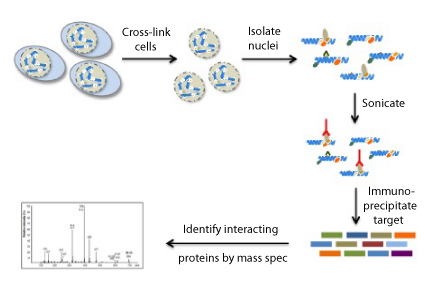 RIME was originally described in this Cell Reports publication.

What our customers are saying about us...

"We used Active Motif's RIME services several times and found their protocol to be reliable and reproducible. Expected interactors were detected robustly and specifically."

"I have ordered RIME/ChIP-MS services. Since the target antibody was first tested by the Antibody Validation Service, I felt confident in proceeding with the main test. The technical staff explained the data and were willing to repeatedly answer my questions. This service provided me with valuable information and helpful support from all the staff members at Active Motif."

The RIME methodology was originally described in this Cell Reports publication.

With RIME, mass spectrometry is used, along with immunoprecipitation of a target protein, to detect endogenous-interacting proteins in formaldehyde cross-linked cells.

Advantages of cell cross-linking include:

Benefits of RIME include:

RIME was performed to identify proteins that interact with the RNA polymerase machinery. Immunoprecipitations were performed with an antibody against POLR2A and two different amounts of cross-linked chromatin from MCF7 cells. Immunoprecipitated proteins were measured by mass spectrometry. The Venn diagram shows strong overlap of the detected proteins even in experiments using a 10 fold difference in starting material. 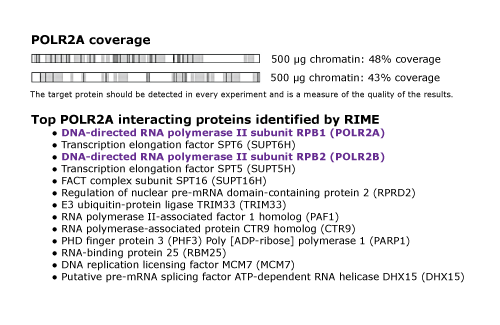 RIME was performed using BRD4 as the target protein and from the list of interacting proteins. DNA Topoisomerase 2A was identified as an interactor, which is supported by literature demonstrating that ligand-dependent Topoisomerases have been shown to be recruited to enhancers†. Therefore, ChIP-Seq targeting BRD4 and TOP2A was performed to show co-localization. Expanding on RIME data with ChIP-Seq can help elucidate gene subsets that require different transcription factors or confirm co-localization of RIME-identified co-factors to the same genes.

Search our database of customer publications that have used our RIME services.