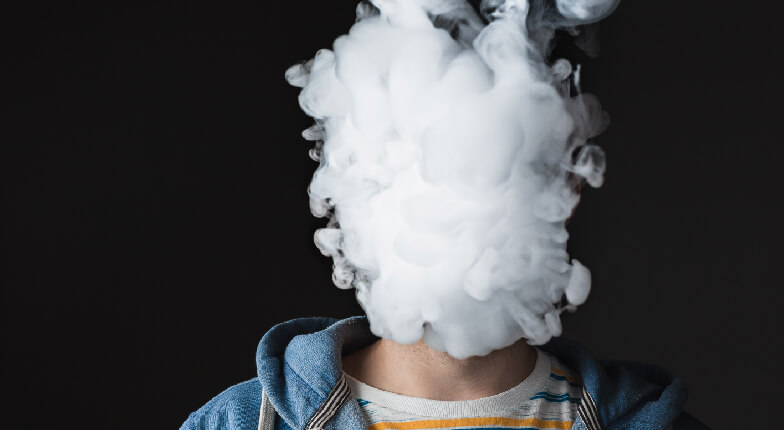 Electronic cigarettes (also known as e-cigarettes or e-cigs) are battery-powered aerosol-nicotine distributors. Using e-cigs is referred to as vaping because the substance being inhaled is vapor rather than smoke. When vaping appeared on the market in 2003, it was sold as a healthier alternative to smoking or a way for smokers to quit smoking cigarettes by gradually reducing nicotine quantity while keeping the smoking gesture. E-cigarette users dramatically increased over the years and public health authorities are becoming more and more worried about the health risks associated with this kind of product.

The health risks of vaping habits, both on their own and relative to the risks of smoking, still need to be rigorously studied to allow the authorities to appropriately regulate vaping around the globe.

What is the Biological Impact of Vaping?

E-cigarettes are available in many shapes and sizes. When using e-cigs, a liquid referred to as vape juice containing various amounts of nicotine is heated to produce vapor that is inhaled by the user into their lungs. In addition to nicotine, this liquid also contains chemicals, including propylene glycol, heavy metals, and glycerin, and other flavor chemicals. This vapor contains small particles that can go deep into the lungs and potentially cause similar damage as smoking.

Although the e-cigarette is supposed to be less dangerous than actual cigarettes, the liquid composition can be unsafe and there are many chemicals in the vape juice that can be harmful to users.

First, nicotine, which is an addictive drug contained in both cigarettes and e-cigarettes, can harm the developing adolescent brain including the parts of the brain that control attention, learning, mood, and impulse control. The addiction to nicotine in e-cigs can also lead to switching to cigarette smoking.

Second, flavors in vape juice can be toxic. For example, a chemical called diacetyl that is used for some vape juice flavors is linked to severe respiratory impairment and obliterative bronchiolitis that is irreversible.

Heavy metals in the e-cig liquid are also well-known to be harmful. Nickel inhalation will have disastrous effects in the respiratory tract and immune system, increasing incidences of pulmonary and nasal cancer.

Finally, the chemical propylene-glycol is a compound that is usually recognized as safe and is commonly used in food, but its inclusion in e-cigarette liquid can be harmful because the lungs are not used to chronic exposure to propylene glycol and the consequences are not known. A study exposing mice to propylene-glycol and glycerol showed that this treatment modifies the transcriptome of clock genes. This is quite alarming since the circadian rhythm deregulation is widely involved in obesity, neuronal disease, and cancer.

The e-cigarette is fairly new, and scientists are still analyzing its long-term effects. More and more publications are studying the consequences of chronic and long-term exposure to vaping to highlight how e-cigarettes can lead to various human diseases.

To accumulate more data about the risks associated with vaping, a team of researchers from the USC Keck School of Medicine at the University of Southern California investigated the biological consequences of e-cigarette use as compared to non-smoking and traditional smoking habits. They used a cohort of patients of the same ages made up of 15 non-smokers, 15 vapers, and 15 smokers, and analyzed DNA methylation patterns in the leukocyte cells from their peripheral blood samples.

Compared to the control group, they found that the global DNA methylation levels decreased by 18% and 13% relative to non-smokers in vapers and smokers respectively. No significant differences were detected between vapers and smokers, suggesting that vaping can lead to many of the same biological changes as smoking and therefore vaping, in general, should probably not be considered a healthier alternative to smoking.

In parallel, the mRNA levels of DNA methyltransferase (DNMT) and ten-eleven translocation (TET) family of methylcytosine dioxygenase enzymes were also measured. DNMTs are responsible for DNA de novo methylation and maintenance of methylation and TETs are responsible for removing DNA methylation modifications. They didn’t observe statistically significant differences in DNMT or TET mRNA levels between the 3 groups, leading the researchers to conclude that the hypomethylation observed in vapers and smokers was not due to changes in expression of DNMTs or TETs, but rather to decreased activity of these enzymes.

To validate their findings, the scientists analyzed different physiologic parameters, including plasma cotinine (which is a nicotine metabolite), exhaled breath carbon monoxide (CO), a biomarker of recent exposure to tobacco smoke, and CO hemoglobin (COHb) levels. As expected, smokers displayed a high level of exhaled breath CO and COHb compared to the non-smoker control group. However, the vaping group showed similar levels of exhaled breath CO and COHb as the non-smoker group. Regarding the cotinine metabolite, both the vaper and smoker groups displayed significantly higher levels than the control non-smoker group.

5-hydroxymethylcytosine (5-hmC) is an oxidation product of 5-mC and has been shown to be an important epigenetic modification that plays roles in biological processes such as carcinogenesis. In this study, the same peripheral blood leukocytes samples were analyzed for 5-hmC levels using an ELISA kit. Similar to the results observed for 5-mC, the vaper and smoker groups exhibited reduced levels of 5-hmC relative to the non-smokers, with 5-hmC levels showing a 66%, and 81% reduction, respectively. No significant difference was detected in 5-hmC levels between vapers and smokers.

They also measured the mRNA expression levels of the enzyme TET enzymes responsible for generating 5-hmC through 5-mC oxidation, TET1, TET2, and TET3. As mentioned previously, there were no statistically significant differences detected in the expression of TET mRNAs between the 3 groups. These results suggested once again that the loss of DNA hydroxymethylation levels was not due to a decreased level of the enzymes, but rather to lower activity.

Finally, the scientists observed a positive correlation between 5-mC and 5-hmC levels, as well as an inverse correlation between global DNA hypomethylation and hypohydroxymethylation and the cumulative “e-liquid/e-nicotine” levels for vapers and the “pack year” for smokers, a measurement that represents the accumulation of nicotine over time. These correlations suggest that nicotine exposure is directly involved in DNA methylation and hydroxymethylation process. Furthermore, while vaping might have some positive health benefits relative to smoking and can be one way to help smokers quit nicotine use, vaping does not represent a healthy alternative to smoking.

Researchers in the Besaratinia lab at USC showed that vapers and smokers displayed similar global DNA methylation and hydroxymethylation losses, relative to the control non-smoker group. Vapers and smokers also had similar levels of the nicotine metabolite cotinine, which was never investigated before this study. This article demonstrated for the first time that vaping has a deleterious effect on cells at the molecular level and induces similar major epigenetic changes as does smoking. The authors brought up different hypotheses to explain this phenomenon. First, the cadmium contained in the e-liquid can replace the zinc ions in zinc finger proteins like DNMT, inhibiting their activity. Some constituents of e-liquid and cigarettes are known to generate reactive oxygen species that could deregulate the DNA repair machinery, potentially leading to DNA methylation loss as well as decreased hypohydroxymethylation.

Epigenetic changes in peripheral blood cells have been associated with some serious diseases, including cancer, cardiovascular diseases, and immunologic pathologies, highlighting the fact that vaping is not less dangerous than smoking and can have severe consequences on health.

More studies containing bigger cohorts of patients need to be performed to decipher the mechanisms underlying these epigenetic changes, but these preliminary results already give us good arguments to limit the use of the e-cigarettes and to discourage teenagers and young adults from vaping.