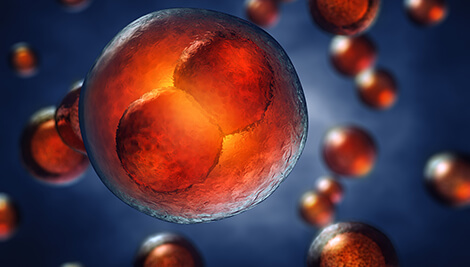 Have you ever thought about how all the cells in your body started out as a single fertilized embryo cell composed of genetic material from your mother and father? That individual cell divided many times, giving rise to the different cell lineages that would ultimately develop into all of the different cell types present in your body today.

A process called zygotic genome activation (ZGA) occurs after fertilization in humans and most other animals, which allows the DNA that came from the mother and father to lose their existing epigenetic modifications and start over with a clean slate.

The mechanism behind ZGA is not completely understood, but a team of researchers in Japan recently published a paper on the ZGA gene Zscan5b and showed that its gene product binds histones, and their results suggest that ZSCAN5B is involved in preventing DNA damage and promotes genome stability through an epigenetic mechanism.

What is Zygotic Genome Activation (ZGA)?

ZGA is one of the first and most important steps that take place during animal development – but the details are still not completely known.

Previous experiments have demonstrated that Zscan5b is likely a ZGA gene because it is expressed at the right times in preimplantation embryos and its levels increase during ZGA. However, a direct role for Zscan5b in ZGA was not experimentally confirmed until a recent paper was published in the journal Stem Cell Reports.

The team of scientists confirmed expression of Zscan5b by real-time qPCR in mouse embryos and embryonic stem cells (ESCs), and also demonstrated that levels of Zscan5b were lower in differentiated adult tissues, consistent with Zscan5b being a ZGA gene.

The researchers next knocked out Zscan5b in mice and surprisingly found that it was not required for mouse fertility or the “stemness” of mouse ESCs. The Zscan5b KO mice were not completely normal though, when the Zscan5b KO ESCs were transplanted into immunocompromised mice they developed into malignant tumors.

There was an increase in the DNA damage response in the Zscan5b KO cells, which was observed as increased numbers of γH2AX foci following X-irradiation. There were also increases in chromosomal breaks and other types of chromosome instability. Restoring the expression of Zscan5b decreased the DNA damage response, suggesting that this protein likely normally plays a role in promoting genome stability during ZGA by preventing the DNA damage events that occurred in its absence.

Biochemical assays demonstrated that ZSAN5B associated with the linker histone H1, suggesting that it might normally coat the chromosomes during development and differentiation to prevent DNA damage and chromosome instability through an epigenetic mechanism.

While zygotic genome activation is a known biological phenomenon, the details involved have not been completely worked out. One of the biggest issues in both natural pregnancies and in vitro fertilization (IVF) is that there are sometimes chromosomal abnormalities or aberrations that result in non-viable embryos. Aneuploidy, a genetic condition in which there are not the correct number of chromosomes, can occur at a frequency of >60% with advanced maternal age.

A better understanding of how ZGA works has the potential to decrease the frequency of genetic birth defects that are the result of aneuploidy as well as hopefully result in improved options for people that want to have children using IVF later in life.

More generally, it’s important to know the molecular mechanisms at play in the very earliest stages of life so we can learn more about the biology of development and differentiation because many human diseases are the results of defects in this process.