* Covered under U.S. Patent No. 6,962,906. Purchase includes the right to use for basic research only. Other-use licenses available, please contact your local Technical Services dept.

The mTRAP Maxi Kit provides all reagents and plasticware required for 6 large-scale mRNA isolations. Each reaction can isolate mRNA from 0.5-2.0 x 108 cells or 0.4-1 gram of tissue and will yield 100-200 µg mRNA, depending on cell type.

The mTRAP Midi Kit provides all reagents and plasticware required for 24 medium-sized mRNA isolations. Each reaction can isolate mRNA from 0.5-1.0 x 107 cells or 50-200 mg tissue and will yield 10-20 µg mRNA, depending on cell type. 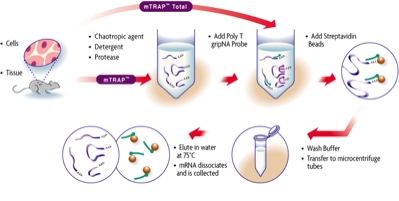 Figure 1: Flowchart of the procedure for the mTRAP Maxi, Midi and Total Kits.

Peptide Nucleic Acids (PNAs) are DNA analogs in which the nucleotides are attached to an N-(2-aminoethyl)glycine backbone instead of to deoxyribose, as in DNA1-4. However, poor water solubility and a tendency to self-aggregate have limited the utility of traditional PNAs. Active Motif has overcome these shortcomings by developing negatively charged PNAs5-7, which have a number of properties that make them ideal for mRNA isolation.

PNA molecules bind to complementary nucleic acids with a much higher affinity than oligo dT. This enables the use of binding and wash buffers that contain significantly lower salt concentrations than conventional methods. These conditions effectively eliminate stem/loop structures, enabling the Poly T gripNA Probe to hybridize to the poly A tails on all mRNA molecules. The low-ionic conditions also remove contaminating nucleic acid and protein molecules that may have formed weak, non-specific interactions with the Poly T gripNA Probe. Consequently, mTRAP Kits provide higher yields of a more representative population of mRNA, with significantly reduced ribosomal RNA and protein contaminations (Figure 1).

Because genomic DNA can contain stretches of poly As, co-isolation of genomic DNA is frequently a problem when isolating mRNA with oligo dT. A useful characteristic of the Poly T gripNA Probe is that it binds to complementary DNA with a higher affinity than it does to complementary RNA. This enables the mRNA to be selectively eluted off the Poly T gripNA Probe. Even during the 75°C elution, genomic DNA remains bound. For absolute certainty that no contaminating genomic DNA is co-isolated, an optional DNase step can be performed during isolation because PNAs are resistant to enzymatic degradation. For complete information on the benefits of PNAs, please download one of the mTRAP manuals. 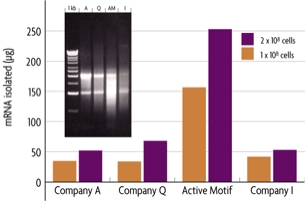 mRNA was isolated from 1 and 2 x 108 HeLa cells using mTRAP Maxi and three other suppliers’ kits. Eluted mRNA was quantified by spectrophotometer and plotted. 2 µg of mRNA from each 1 x 108 sample was run on a 0.8% agarose gel. mTRAP-isolated mRNA shows no genomic DNA and less rRNA.